Today marks 4 months since I arrived in São Paulo for orientation. Since the last blog post in April many moments have continued to shape my understanding of the Brazilian way of life, the people, and how language informs culture. Throughout these four months I have met new people and continued to practice my Portuguese language skills.

One of the newest cultural immersive experiences I have been a part of is the Carona System. Caronas are rides that people offer to and from city destinations. For example, from the city of Lavras to Belo Horizonte (the Capital of Minas Gerais) or between smaller cities like Lavras and São João del Rei or Varginhas (where the Federal Police is for residents of Lavras). There are many Facebook pages dedicated to coordinating these rides. If you are interested in going to a destination you need to request to join a Carona group page. Then you can post what time and date you are interested in going or directly message individuals who posted about a specific date and time that may match your travel plans. Here are some picture examples to showcase this system run entirely through Facebook group pages. These Carona options are often cheaper and faster travel time compared to the buses throughout Brasil. 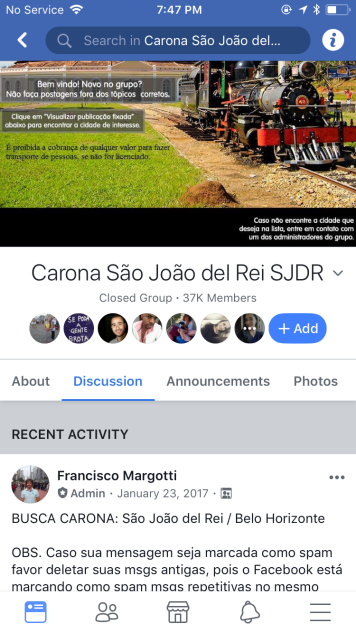 I share the Culture of Caronas because it was part of my experience on my way to São Paulo. On our way there I experienced first hand that National Truckers Strike that happened here in Brasil in May 2018. At first the lady who agreed to take us said she wasn’t sure if they were going to go to São Paulo due to the Truckers’ Strike. Since the trucks were stopped on the highways and were not delivering products and gasoline. Up until then we did not know what was happening until we got notice from our host institution that classes were closed due to the strike. Once we got notice that the ladies were still going to São Paulo, my co and I stopped at the supermarket to get some snacks and water for the car ride. Here we saw the rapid effects of the strike in the interior of Minas Gerais. There were signs apologizing for the lack of fresh fruits, vegetables and other products since the products were not delivered. 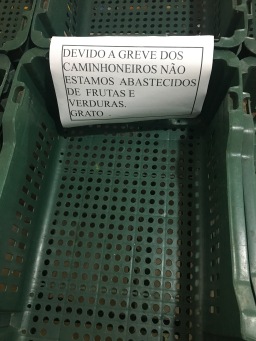 We started our journey to São Paulo and as soon as we got onto the main highway we could see the trucks stopped along the highways, but were not blocking civilian drivers. It wasn’t until we drove about 200 km from Lavras to Cambuí where we were stopped by a blockade of protestors on both sides of the highway. On one side there was fire and people standing in the middle of the road stopping the traffic. Here we were stopped for a total of 30 minutes yet in the moment it felt like hours. I was sitting on the left side of the car and the fire was right next to my window. An extremely dangerous situation. The wind could’ve blown that fire in my direction. After about 20 minutes of standstill traffic a man came out of his car to speak to the men blockading the traffic to tell him that there were children and babies in these vehicles. After about 10 more minutes they slowly started letting people drive by again with one lane open.

At this point I still did not know exactly what was happening – all I understood was that the Truckers’ were protesting the increasing prices of gasoline and as a form of resistance, they decided to not deliver that gasoline or other products in their trucks. As a result, interior cities were the most effected because they have less reserve of these products and gasoline. For example, In Lavras, Minas Gerais during the strike or Greve, gas stations and supermarkets ran out of gasoline, fresh vegetables and fruits on the first day of the Greve. The Truck Drivers decided to stop on the highways as a form of protest and pressure for the government to respond to their demands. Once we arrived in São Paulo (About a 5 hour car ride) we noticed that the effects of the strike had not hit the city yet. I was there for about a week for safety precautions since traveling back to Lavras, Minas Gerais from São Paulo was still considered risky. Towards the end of the week buses were running with perhaps a delay or less buses available due to the lack of gasoline in some parts of the cities. There were long gas lines everywhere and people stocking up on basic groceries such as water, non-perishable items and gasoline if possible.

During my time in São Paulo my Co and I bought some English books since we missed having access to English reading books. One of the books that we bought was The Unbearable Lightness of Being by Milan Kundera. Though I have not started reading this book one day reflecting on the events that were unraveling in São Paulo and Brazil, I opened the book to a page to read and this passage jumped out so poignantly – “Being in a foreign country means walking a tightrope high above the ground without the net afforded a person by the country where he has his family, colleagues, and friends, and where he can easily say what he has to say in a language he has known from childhood” (Kundera, 71). All the emotions one experiences when living and working in a other country flooded to the surface and reminded me how much language and communication go hand in hand with cultural understandings.

Through my daily encounters language is at the center of communication ready and eager to makes its way through my vocal cords, lips and tongue. Sometimes the linguistic sounds needed for mutual understanding do not come out the first time I try to form sentences in Portuguese. In many ways, navigating these spaces without this “net” afforded to Brazilians because they were born here gets tiring. Though I am eternally grateful for the Fulbright experience, learning to communicate in a way that Brazilians understand without oversimplifying what I need, since my Portuguese skills are still growing is a daily conscious commitment to making many mistakes. These mistakes help me grow in ways I will apply to many more life events, yet sometimes I want to be able to say what I want to say in a way that would be understood by the person I am trying to connect with. Generally, for me this is either in English and/or Spanish. I hope to reach a level of proficiency and understanding in Portuguese where these conversations are smoother and more fluid with few grammatical mistakes that halt what seems to be a seamless conversation.

All of these reflections co-exist with the National Truckers’ Strike because in order to understand the news that was being broadcasted, I needed to listen closely and carefully to fully comprehend the updates. And essentially process this strike alone without much support in country, since my family and close knit support system is in the United States.  In addition to learning what was happening, I also needed to know how to communicate what I may need in case of an emergency. Once international news media sources began commenting and reporting on the events I noticed some discrepancies between the international narrative of the events unraveling in Brazil and what was being reported on the local news channels in country. Thus, language, culture, and perspectives influence how a story is told. In addition, those who have the power to tell the story also influences how a narrative is told. Therefore, no matter how hard some days are in Brazil with language communication, I am grateful that I was able to sift through some media sources and try to rely on the most credible sources. Also, learn how another country reacts to a National Crisis such as a National Truckers’ strike. These events affected people’s daily lives and how to get to work, school, and especially public transportation. I learned that a huge part of Brazilian daily functioning relies heavily on gasoline in order to fuel their bus system. There are no train systems and very few cities have a metro system in place. 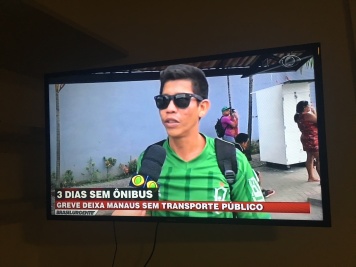 A month later things seem to have found its way back to its normal functioning since Truckers’ have slowly returned to their normal routine. I can’t help but wonder if the truckers received what they had hoped for when they started their Strike. Part of any abroad experience, we are called to learn about the society and the people’s relationship with the state and government. Though living through the strike and the car ride from Lavras to São Paulo was scary in many ways, it reminded me that to create change, a certain level of disruptions within the social order of the status quo should happen. The Truckers used their voices to demand change for their work conditions. In this way, they halted the traffic all over the country in efforts to get their voices heard. I will most likely spend many months and years processing the events of the National Truckers’ Strike and reflecting on the implications it has on the Brazilian community and the international global community as they learn and read about Brazil.

Today June 25, 2018 marks the 4-month anniversary of my time in Brazil and reflecting back on the woman that arrived in São Paulo in February to now – I believe I have grown so much. I have learned about Carona rides (all taken with some safety precautions), I continue to practice my Portuguese language skills and meeting new people daily. I experienced a National Truckers’ Strike with my Co and at the end of the day I had to rely on my instincts and personal gut feelings on how to navigate the current situation of the strike. The common thread among all these experiences has been the challenge to meet the moment as it comes. To fully engage with the present moment and learn from it rather than always try to shift it or try to fit it into a mold of what I may think is better. I have learned along the way that if I truly meet any given moment as it comes, the result is usually 100 times better than what I had originally planned. Usually, if I let it be, it will all work out and fall into place. I am moving into the next phase of my Fulbright experience with this new mindset of meeting Brazilian moments as they come and strive be fully present. In this way, I hope to maximize the next 5 months that I have left in Brazil.

As always, thank you for taking the time to read through my lived experiences! I hope you learn something along the way!